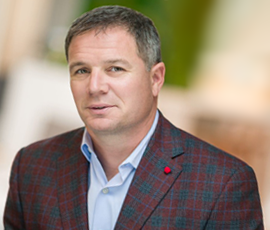 As president and CEO of the U.S. Travel Association, Geoff Freeman is the leading advocate for the $1.1 trillion U.S. travel and hospitality industry.

In this role, Freeman is charged with ensuring the industry’s full recovery from COVID-19, positioning the industry to seize emerging opportunities in a post-pandemic market environment and further establishing travel as a vital economic force in the United States.

Freeman is a seasoned association CEO with a proven track record of building successful organizations that unite member interests, grow member value, increase revenue and unlock growth opportunities. Prior to joining U.S. Travel, Freeman was president and CEO of the Consumer Brands Association, the trade association for America’s $2.1 trillion food, beverage and consumer products industry. During his tenure, Freeman launched a strategic campaign to transform the association into a powerful, modern advocacy organization aimed at driving growth and delivering sound regulatory and legislative outcomes that benefit industry leaders and consumers. During his tenure, Freeman grew membership by 35 percent and boosted total revenue by nearly 50 percent.

Freeman joined the Consumer Brands Association after serving for five years as president and CEO of the American Gaming Association (AGA). In that role, Freeman led a successful effort to reform and modernize the AGA, build public support for the gaming industry and open new pathways for industry growth. Under his leadership, the AGA spearheaded a multi-year, research-driven campaign to demonstrate gaming’s broad support across the political spectrum and promote the industry’s role in spurring economic growth, job creation and tax revenues in communities across more than 40 states where gaming is legal. That campaign created the tailwinds needed to advance AGA’s signature initiative achieved under Freeman – the legalization of sports betting in the United States. While leading AGA, Freeman drove a 200 percent increase in membership and doubled association revenue.

Freeman previously served as COO of the U.S. Travel Association from 2011 to 2013, helping to conceive and lead a campaign that resulted in the passage of the bipartisan Travel Promotion Act, which was hailed as “the industry’s biggest legislative victory in a decade.” In the aftermath of 9/11, Freeman created a blue-ribbon panel headed by former Homeland Security Secretary Tom Ridge to analyze how to improve travel security without compromising travel efficiency. This effort led directly to the creation of TSA PreCheck. Both the Travel Promotion Act and TSA PreCheck demonstrate Freeman’s ability to identify industry opportunities, craft a winning policy response and drive campaigns that succeed in gaining broad support among diverse stakeholders.

A graduate of the University of California, Berkeley, Freeman lives in Arlington, Va., with his wife and three children.

Last chance to join us in Chicago!